The founders of Heimdallr have spent many winters in Norway delivering various types of training from team building to arctic survival. The God Heimdallr depicts the values and ethos of the company.

Heimdallr is the god of light, the son of nine mothers. He is sometimes called the white god and Goldtooth. He was born at the end of the world and raised by the force of the earth, seawater and the blood of a boar. He is the watchman of the gods and guards Bifrost, the only entrance to Asgard, the realm of the gods. It is Heimdallr’s duty to prevent the giants from forcing their way into Asgard. He requires less sleep than a bird and can see a hundred miles around him, by night as well as by day. His hearing is so accurate that no sound escapes him. 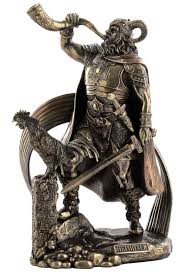